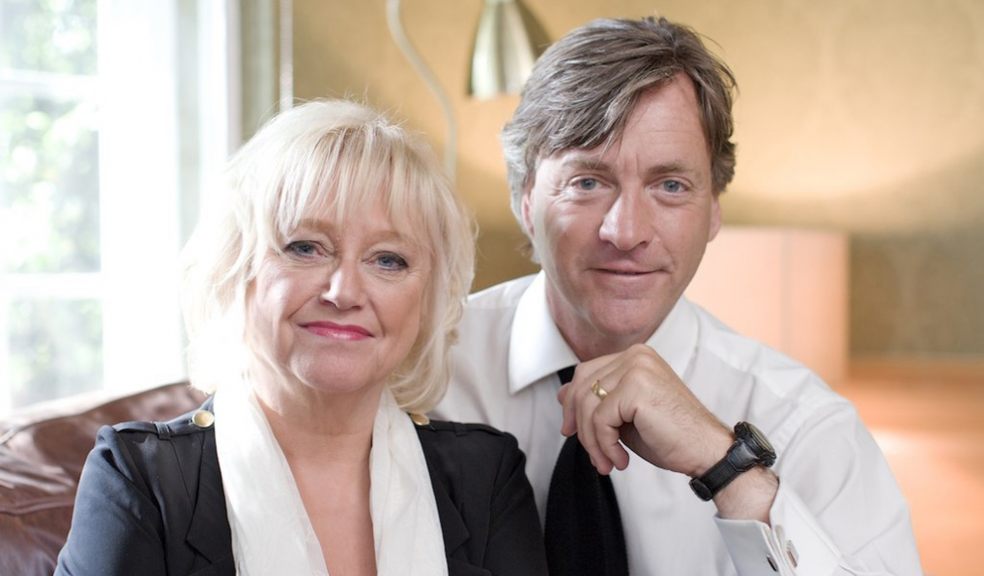 Richard Madeley and Judy Finnigan are used to being in each other’s pockets.

The husband-and-wife duo have worked together since they met in 1982 (they both worked for Granada Television at the time), including over a decade as the presenters of ITV hit This Morning.

So, they’re the perfect people to advise couples on how to cope whilst stuck together in lockdown, during the Covid-19 pandemic.

“In all marriages, things can occasionally get tense, and you can get a bit snappy with each other – especially if you are together 24/7,” suggests Essex-born Madeley, 63, who married Mancunian Finnigan, 71, in 1986.

“The only tip I’d give is to step away, go to another room, read a book, go for a walk. Try and give each other space, because everybody’s going to be a bit on edge at the moment, and you’ve got to try and be understanding and accepting of that.”

The chatty pair’s latest project is a five-part Channel 4 series, Richard & Judy: Keep Reading And Carry On. Filmed from the couple’s North London home, it will see them reveal their best reads, and interview – via video link – celebrity guests and writers, such as David Walliams, Jo Brand, Adam Kay, Clare Balding and Judge Rob Rinder.

When we speak on the phone, it’s the day before they start filming – and just under a week until the first episode will air.

“It was completely out of the blue; Channel 4 only approached us about a week ago, to ask if we’d do it,” reveals Finnigan. “It will be very strange… I think there are two cameramen, they’re the only people in the house with us, obviously keeping huge social distancing at other ends of the room.”

Madeley adds: “It will certainly be the first time we’ve been talking to cameras with the cameraman in Hazmat clothing behind it! At the end of each day, they’re going to sterilise the room that we’ve been using as a studio – our back-living room. And when they leave, they’re going to do a real deep clean.”

They did have concerns about hygiene and safety at first, he admits.

“But the production company that’s making the programme, they make [BBC documentary series] Hospital at the moment, and they’re actually filming in a coronavirus ward, so they’re fully up to speed with all the protocol we need to do. So, we’re not worried about that at all now.”

With so many of us staying home at the moment, it certainly seems the perfect time for a show like this (which Madeley is keen to emphasise is not a “strait-laced book programme”, instead calling it a “chat show with celebrities, writers, books at the heart of it”.)

Page-turners which will be featured include Sir Elton John’s autobiography; Me, Sally Rooney’s Normal People – which has recently been televised by the BBC – plus Lee Child’s latest Jack Reacher novel (“We’re both big Jack Reacher fans,” says Madeley).

“For anybody who doesn’t get the time to read very much, we’ve now got the best chance in the world,” notes Finnigan.“It’s very relaxing, can completely remove you from any anxieties that you might be feeling, any worry about the future. If you just get wrapped up in a book, and wrapped up in someone else’s life, and a completely different kind of experience, it’s really, really good for the brain.”

On the topic of lockdown, she says the only thing her and Madeley are really missing is their kids.

They share daughter Chloe and son Jack, while she also has two twin sons Dan and Tom from her previous marriage (both her and Madeley were married when they met in 1982). They also have three grandchildren.

“I think for a lot of people, that’s the worst thing about it really – it’s not so much being at home, it’s being at home and not being able to see the people you love and care for the most,” Finnigan continues. “But we just have to hope that it will come to an end relatively soon.”

“It’s incredibly tempting…” Madeley pauses, before elaborating candidly: “We’ve actually had conversations about, ‘Maybe we should just get in the car and go and see them at arm’s length, give them a wave through the window’.

“But it’s against the spirit of the rules really. So, we decided we really, really, shouldn’t do that. But, like so many parents and grandparents, we can’t wait for that particular restriction to be lifted, so at least close family members can start seeing each other again.”

The pair – who are also both columnists and authors – agree it will be comforting for fans to see them on screen together at teatime again. It will also give viewers a chance to see inside their domestic setting, something they have kept completely private until now.

Was one of them perhaps more hesitant about doing the show than the other?

“No, I think we’re both relaxed about it,” says chirpy Madeley. “We’re in our own home – it’s hard to feel nervous in our own home. But frankly, even if it were in a studio, it would be fine. I’ve kept my hand in over the last 10 years since we stopped doing the Channel 4 show; I sit in for Piers Morgan on Good Morning Britain quite a lot, and I sit in on Radio 2 on Sundays. I’ve done quite a lot of other broadcasting work in my own right.

“Judy has tended to say no to most offers; she has not traditionally been interested. When This Morning approached us a few months ago – apropos of nothing really – and just said would we fancy coming back to do the odd day, I was amazed that Judy agreed to do it, because her default position is to say, ‘No thanks, I’ve done that, I don’t do that anymore, thank you’.”

He concludes excitedly: “We hadn’t done This Morning together for 20 years or so… And sitting together side by side on the sofa and going live, it did not feel strange at all. In fact, the only thing that was strange about it was how un-strange it felt.”

Richard & Judy: Keep Reading And Carry On starts on Channel 4 on Monday, May 4