With travel restrictions finally lifting and international travel returning to something closer to normal, many will be keen to get back out in the world and leave miserable blighty behind this summer. But you might just want to think again!

With longer, brighter and warmer days on the horizon – this year’s summer season is coming in hot. In fact, experts are predicting a proper summer here in the UK, with temperatures to rival those on the continent and sunshine for days. Couple that forecast with the upcoming Jubilee bank holiday weekend and it’s a perfect recipe for exploring what the UK has to offer – but where should you be heading?

New research by BravoVoucher reveals a list of the most and least Instagrammed Areas of Outstanding Natural Beauty (AONBs) in the UK so that you can hot foot it to a tried and tested favourite or a quieter (but just as beautiful!) alternative.

The research analysed Instagram hashtag data for all the official outstanding areas of natural beauty from up and down the UK, bringing you some fresh ideas for your next trip.

Here are some of the best picks – an ultimate list of staycation musts and some real hidden gems.

The South of England shines bright in top 3

Cornwall, the Isle of Wight & Isles of Scilly sit in gold, silver and bronze medal positions respectively with over 11 million hashtagged Insta posts between them. According to the data, that’s almost double the total number of hashtag posts belonging to AONBs in the rest of the top 10. 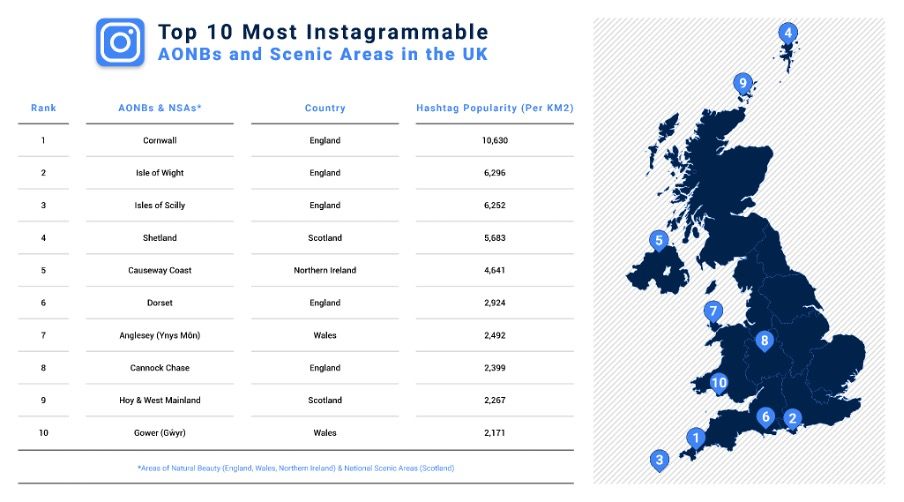 Islands claim close to half of the top 10 Instagrammable spots

With 4 of the top 10 positions taken by islands from around the UK, it is clear to see that there is something magical about being close to the water and cut off from the rest of the world. In England, the Isle of Wight & Isles of Scilly take 2nd and 3rd place with the Isles of Scilly benefiting from access via the top spot Cornwall. For Scotland, the Shetland Islands come in 4th, offering a whole archipelago of stunning choices and in Wales, Anglesey sits in 7th position as the country’s most Instagrammable location. 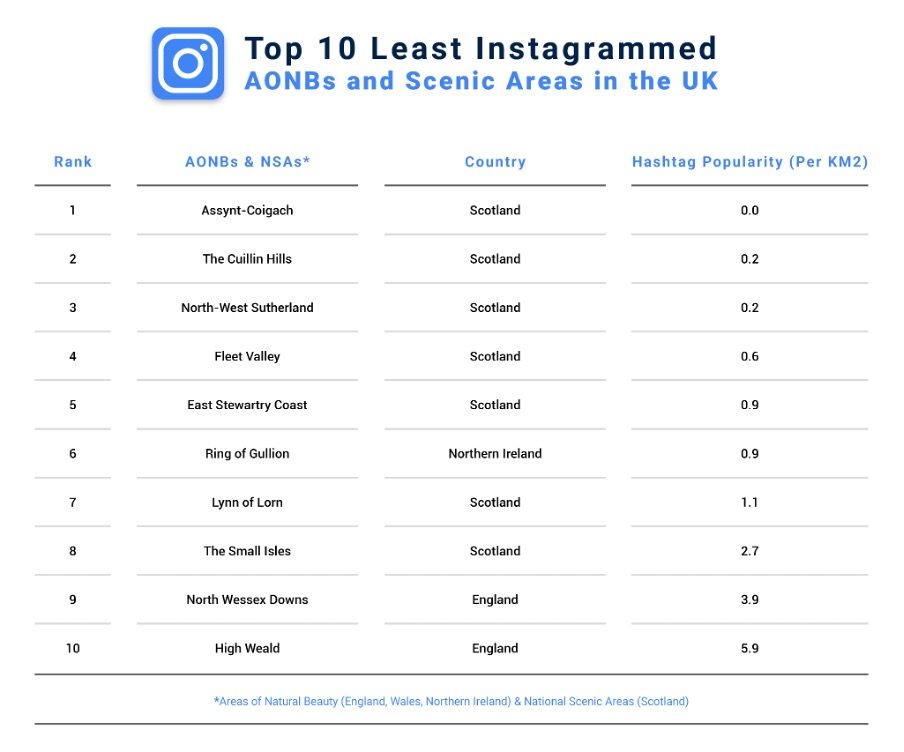 If you love an Instagrammable travel spot, but hate queuing to reach a mountain peak or jostling for position on the beach, don’t fret, there are plenty of hidden gems out there waiting for you. The only thing you’ll have to share are your enviable Insta photos!

Boasting 7 of the 10 least Instagrammed scenic areas, Scotland is arguably an undiscovered world of natural beauty, according to the new research.

Topping the chart is Scottish Assynt-Coigach featuring cliffs, sea stacks and wild moorlands. This Highland ridge is as jaw-dropping as it is hard to pronounce! An impressive backdrop for all those selfies you’ll be taking – once you’ve picked your jaw up off the floor that is!

In second place is The Cuillin Hills, a majestic ridge of rocky mountains on the Isle of Skye formed 60,000,000 years ago. With plenty of summits to conquer, set your camera to panoramic and make the most of those uninterrupted views.

Slap-bang on the popular road trip route, North Coast 500, third place North West Sutherland is where the mountains meet the sea. Here you can drive from one seafood restaurant to the next, snapping those mouthwatering plates of food at each stop and causing some serious food envy on Instagram.