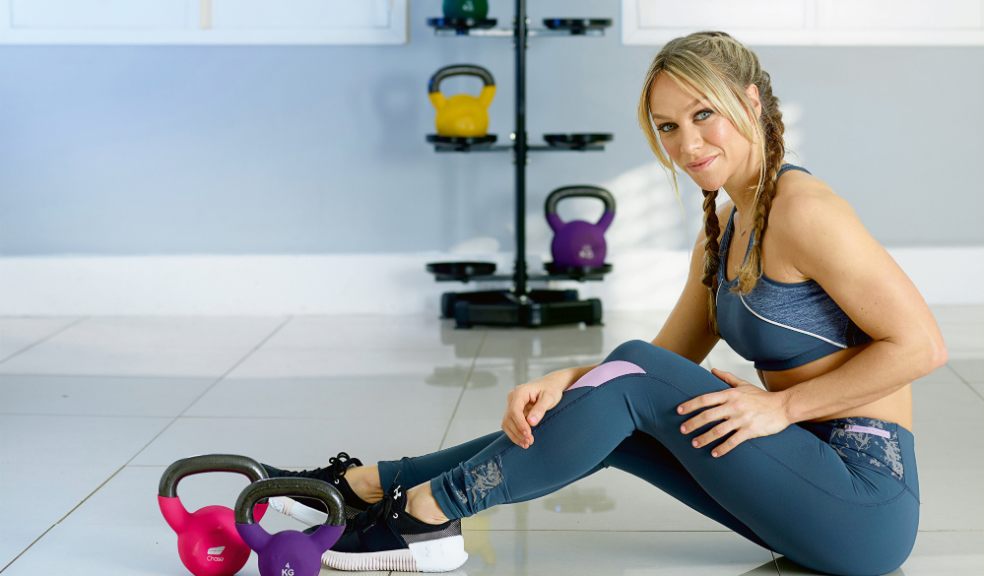 Chloe Madeley talks to Hannah Stephenson about how weightlifting eased her anxiety, life with James Haskell and the prospects of starting a family.

Personal trainer Chloe Madeley has found a fulfilling career as a fitness guru, but married life with James Haskell has also brought happiness.

That's despite the fact he doesn't pull his weight at home in Northamptonshire, she shares with a laugh, as she jokes about his shortcomings.

"I love James to pieces but he is no domestic goddess," the bubbly fitness expert says wryly.

"I do all the cooking, which I love. James doesn't cook. The guy cannot even change a light bulb. Anything that needs doing within the house, he can't do.

"Weirdly enough, he's quite good at gardening," Madeley, 32, adds. "He likes to have a little mow and a little trim. Outdoorsy domestic stuff he can do but not inside. He doesn't even empty the bin! And he's stubborn! I can push as much as I want but he ain't doing anything he doesn't want to. My mum's like that – they are very similar."

Before fitness became her calling, Madeley appeared on TV as a presenter (Big Brother's Big Mouth) and a contestant on sporty reality shows Dancing On Ice and The Jump.

Many thought she would follow in the footsteps of her famous mother and father, former This Morning hosts Richard Madeley and Judy Finnigan, but today she feels more at home in the gym than on telly.

She's now written her third fitness book, Transform Your Body With Weights, in which she shows the benefits of weightlifting for both body and mind, demonstrating various weightlifting workouts for anyone from beginner to advanced, with accompanying meal plans.

"This is my third book but there's still so much stigma around women and weightlifting that I really had to fight to get this one out there," she reflects.

Weightlifting has also helped her manage her own long-term anxiety issues, she reveals.

"It [anxiety] was habitual in my 20s, but now that I'm in my 30s something has to happen that is a genuinely stressful situation for me to get anxious about it. So when James was doing I'm A Celebrity and I looked at the screen when he had his 'hangry' episode, and his face looked gaunt, I got really upset and anxious. He looked ill.

"People laugh and roll their eyes and say, 'It's just a TV show', but unless you know someone who's done the show, you don't realise how incredibly hard it is at points to watch."

Madeley's own fitness regime has given her an enviable physique. A recent post to her 231k Instagram followers sees her in a racy shoot wearing just a gym top, extolling the virtues of weightlifting. She also has a fitness podcast called Bodcast, which has featured her father and her husband as guests.

After just a year of marriage, her emotional reunion with former rugby union pro Haskell on his eviction from the Australian jungle in I'm A Celebrity... Get Me Out Of Here! gives an idea of how close the couple remain.

They have started to think about starting a family, she reveals.

"I mean, James is 34 now, I'm 32, we've been together five years. There was a point about a year ago where we were thinking that maybe kids wasn't for us because we are quite career-driven and like to spend our free time and money on travel. Neither of those really promote a family.

"We felt a bit guilty about it, for our parents, and when we were asked it was a bit awkward when we said we weren't sure. But in the last few months, we've definitely started thinking about it and considering it more.

"We're not quite there yet but we are definitely more open-minded about it than we were a year ago, so obviously something's shifted."

Of course, her parents would love to be grandparents again, she beams.

"They already have three grandchildren, but I'm the only girl in the family and they always say to me that there would be something quite special about me having a baby. They would find it really lovely. But as much as I want to make my parents happy and I love them to death, I am not going to have a baby just because they want me to!"

She admits her anxiety when she was younger was exacerbated by the fact she's the daughter of a famous TV couple.

"It would have been fine had I not wrongly decided to go into a career in television," she says candidly. "If I'd found a different career earlier on, it wouldn't have got so bad.

"I was in their world as their daughter and was given a lot of flak both behind the scenes and in the press. Everybody was accusing my whole family of nepotism – it was and it wasn't. I was working my socks off as a runner behind the scenes, and then I was taking the novelty factor of being my parents' daughter and going in front of the camera.

"Because I didn't have my own identity or my own sense of self, it made the problem worse."

Now, with a successful personal training career and two previous bestselling fitness books under her belt, she has found time to support her parents with their own wellbeing.

Finnigan has lost lots of weight over the past few years, Madeley agrees.

"Both she and my dad stopped drinking completely about a year ago. A glass of wine is anywhere between 100 and 200 calories. If you are drinking throughout the week, those calories add up, so when you take that out, you are talking about potentially thousands of calories being pulled out of your weekly average calorie intake.

"I didn't encourage them to give up booze, they just decided to stop drinking. I would never encourage them to do anything. They're my parents, they're not children. They can make their own decisions," she says.

"But when they told me they were giving up drinking, I said, 'That's fantastic!' I thought it would probably be for a few weeks, but we're a year later and they feel so much better that they are still going. I feel quite proud of them."

She has also been supporting her parents with lifestyle and diet advice.

"I've been helping mum implement intermittent fasting. I've been helping her figure out how she wants to do it. She's not the most active person, she has bad eyes and bad knees, so I tell her just to be active, to get up, walk around. I don't think she'll ever throw herself into an exercise routine and nor should she. As long as she's active, she's fine.

"I've bought my dad some dumbbells and barbells and have helped him do some very simple lifts, which will help his body," she continues. "He had a fall last Christmas on some black ice at a petrol station and shattered his elbow. It's really important he keeps the muscle in his arms and upper body, so he doesn't have any issues in later life with that arm. We need to get his bones strong and his muscles around the bone strong.

"Dad's really active. He loves a walk, loves a bike ride, he loves moving, so he's doing great. That's partly why he looks so young!"

While her fitness career remains her focus, there's only one way she'd be lured back to TV now, she reveals.

"I would go back to TV if I could do something with my husband, because it would just be so much fun to work together," says Madeley. "That is pretty much the only situation in which I would go back to television, or if it was really focused on what I do, which is health and fitness."

Laughing, she dismisses any notion that they could become the next Richard and Judy.

Transform You Body With Weights by Chloe Madeley is published by Bantam Press, priced £16.99. Available now.