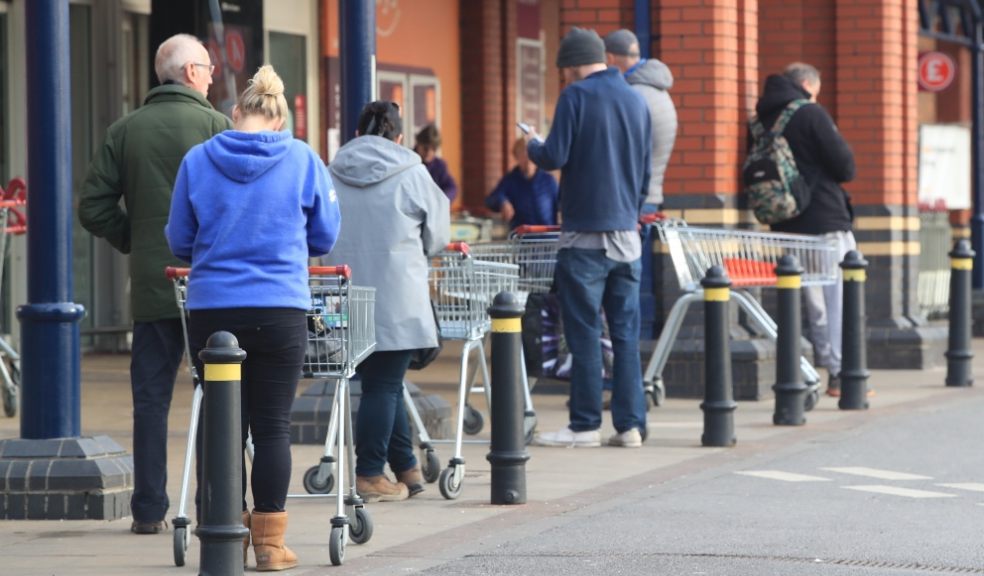 Hannah Stephenson shares her fears as her son returns to work in a supermarket after a period of self-isolation.

“Stay two metres apart, don’t forget your hand sanitiser. Do you have your gloves?”

These were my parting words to my 21-year-old son this morning, who left the self-isolation of home to resume his place on the front line – not of the NHS, but of the supermarket.

Last year he had training in store, followed by enjoyable stints in various departments and the prospect of special projects.

All this was thrown on its head two weeks ago when office staff – not just juniors like my son, but more senior employees too – were sent back to stores, which were struggling to cope with the barrage of people panic buying, pushing and shoving, stuffing their trolleys with loo roll, pasta, hand sanitiser and other basic goods. Even the run-up to Christmas hadn’t been a patch on this madness, he told me.

Less than a week after he’d returned to store earlier this month, he came home feeling ill: sore throat, cough, flu-like symptoms. While at the store he had done as much hand sanitising as was physically possible (members of staff were all given their own small bottle), worn gloves and bought a protective mask (which turns out is pretty useless).

He immediately informed work that, as per government instructions, he would be self-isolating for seven days. That meant that we, his family, would be doing the same for 14 days.

His symptoms, however, got worse as his chest tightened. We rang the GP who rang back, went over his symptoms, history (he’d had pneumonia twice as a young child) and prescribed antibiotics, suspecting a chest infection.

Over the next few days my son recovered. Today, just over a week after quarantine began, he returned to work, to the store where customers will likely be standing too close for comfort – although many supermarkets are now installing protective screens at checkouts and trying to distance customers.

He hasn’t been offered PPE (Personal Protective Equipment) or any really effective protective clothing up to this point.

We toyed incessantly about whether he should return. He’d had chest infections as a child – did that make him vulnerable, even though as a young adult there had been no such recurrences?

His hopes of learning new skills within different departments of the business look unlikely in the immediate future as the prospects of returning to any semblance of normality soon become more remote, but he’s needed on the shop floor.

And how would it look on his CV if he jumps ship from a front line provider when the going gets tough, simply because he isn’t learning enough?

Wouldn’t it be more stoic if he were to return to the supermarket to help deliver the food and other items people do genuinely need to at least keep the country fed? It would surely be a great show of resilience in the face of disaster, when on your future job application you could write: ‘I served on the front line during the coronavirus pandemic’.

A supermarket assistant may seem a world away from the tireless health workers doing gruelling shifts to care for the many people who are succumbing to this horrific virus. If my son were an NHS nurse, would we even consider that he should quit in the face of this invisible killer?

He is not exposed to diagnosed coronavirus patients who are gasping for breath, as doctors are faced with heart-wrenching dilemmas as to who should have a ventilator. He has not witnessed last breaths.

Would anybody miss the absence of a supermarket assistant? Singularly maybe not, but collectively definitely.

Realistically, with the best will in the world, he is unlikely to be able to remain two metres from people during his shift. If health workers are not being given adequate protective clothing, what hope is there for supermarket workers? It’s something supermarkets surely need to consider.

As a mother, anxious thoughts pervade. Am I allowing him to be thrown back into the lion’s den of customers and fellow workers, who may be super spreaders? I know I will never forgive myself if he contracts Covid-19 and ends up in hospital, or worse.

But he’s 21 – it’s his decision. And this morning he left home equipped with gloves, hand sanitiser and a huge reminder of spatial awareness. I’m incredibly proud – and as anxious as I have ever been.