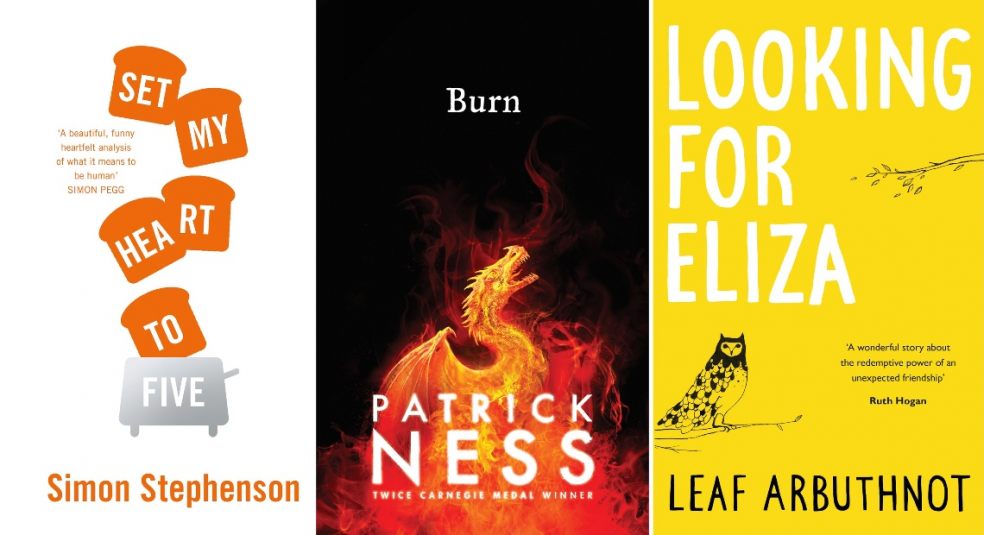 Patrick Ness returns with a powerful story of a world that has dragons in it, and retired Met Police chief superintendent John Sutherland shares what he’s learned.

1. Looking For Eliza by Leaf Arbuthnot is published in hardback by Trapeze, priced £14.99 (ebook £7.99). Available now

It’s often hard to consider a book on its own merit when it’s potentially ‘the next so-and-so’ and it was initially the same with Looking For Eliza, which could be compared to Elizabeth Is Missing or even Eleanor Oliphant Is Completely Fine. But what sets this book apart are the characters – a gay PhD student, Eliza, and widow and poet, Ada, in her mid-seventies – rather different to the usual single, straight 30-something protagonist you might find in up-lit. Set among the dreamy spires of Oxford, Looking For Eliza will be a tonic for anyone missing Normal People and its studenty, Dublin setting, and explores unlikely friendship. Isolated Ada advertises herself as a ‘Rent a Granny’ while Eliza is lonely, estranged from her mum, newly single and a less affluent member of the student society, among wealthier peers. A classic unlikely couple, they come together to inadvertently help the other blossom creatively again. But the friendship is by no means a softly-softly one, with the Brexit referendum thrown in for good measure. You’ll need (and want) to hang on till the very end to see if lasting companionship truly blossoms.

2. The Magnificent Sons by Justin Myers is published by Piatkus as an ebook, priced £8.99 (published in hardback on August 6). Available May 28

Jake D’Arcy, 29, is seen as the boring one in his boisterous family, but when his younger brother Trick comes out as gay, he finally confronts the lifelong suspicion that he might be bisexual. The Magnificent Sons is the story of two brothers coming to terms with their sexuality, but feels more complex and real than most ‘coming out’ stories. On the surface, it seems like just Jake’s story, but it is more than that and Myers has written an enjoyable cast of characters that accompany him on his journey. The writing is raw and honest, and even if at times it means characters are not entirely likeable, they remain real. However, there are a few too many subplots that sometimes crowd the page and don’t always feel necessary.

The premise of Set My Heart To Five by screenwriter Simon Stephenson is both sweet and silly, but then a tad annoying as you get deeper in. Jared, a dentist bot circa 2054 can “no more feel than a toaster”, and yet, he begins experiencing worry, and then even crying at old movies. Guided by a ‘Feelings Wheel’ given to him by a doctor Jared does not consider a friend, the android finds himself both “bamboozled” and propelled (ok, chased) across America, all the while trying to come to terms with his newfound emotions. Intriguing, yes, but the delivery is self-aware to the point of grating at times. Jared’s repetitive use of phrases (“Ha!”, “10/10”, and “Humans I cannot!”) is amusing at first, but halfway through you do want to say to Stephenson, ‘We get the point. Ease up, will you?’. The slipped in mentions of what’s happened to the planet, and how humans have adapted (presciently, everyone seems to work from home, and Elon Musk has a lot to answer for), are knowing and playful, but the finale runs out of steam, and an emotional punch – despite Jared’s emotional growth – is somewhat lacking.

4. Crossing the Line: Lessons From A Life On Duty by John Sutherland is published in hardback by Weidenfeld & Nicolson, priced £16.99 (ebook £8.99). Available now

In Crossing The Line, retired Met Police chief superintendent John Sutherland draws on his 25 years of service to highlight the extraordinary everyday bravery and commitment of police officers who face overwhelming challenges. Each chapter scrutinises a different social issue, be it drugs, knife crime or domestic violence, interspersing empathetically told true stories of victims with grim crime statistics, to underline officers’ vital work. Sutherland is no blind apologist and acknowledges past and present police failings. Instead, he makes an impassioned plea for solutions to support forces hit by years of austerity. Driven by hope for the future, he suggests many himself, making cases for alcohol minimum pricing, a public health approach to knife crime and a new public conversation around drugs. Firmly in his sights are politicians, who he blasts for their self-serving and short-sighted outlooks. Tough, earnest, thought-provoking and moving, this is a book that lingers.

Children’s book of the week

Patrick Ness writes searing YA fiction that burrows into your consciousness, and both emboldens you, and helps smooth out the rough corners of being human – whether you’re a teenager, or a grown-up who’s meant to have figured everything out by now. Burn is no different. It’s 1957, and the world is much like ours, except dragons exist, and keep to an uneasy historical truce with humans. Struggling to maintain the family farm, Sarah’s dad hires one to clear some land – an observant, snarky blue dragon called Kazimir – but he’s not just come to work, instead he’s drawn by a prophecy set to change everything. Meanwhile, a scrawny kid called Malcolm is on a mission of his own. What could be a fantastical, fire-breathing lark, becomes instead a compelling and touching story that winds together grief, first love (no matter your sexuality), fear and the power of responsibility – and what happens when it’s misplaced. Burn is imbued with huge amounts of heart and curiosity, and doesn’t recoil from politics, or a few brutal shocks that keep the pace electric. An incredibly touching, powerful and startling read.